Arms: Azure, on a fess Argent between three mullets Or, three escallops Gules.
Crest: On a wreath Azure and Argent, a cat sejant erect guardant Or, armed and langued Gules, holding in its forepaws a celestial globe Proper.
Motto: Look Aboon Ye
Badge: Within a strap Azure buckled Argent charged with the motto in Argent, the crest. 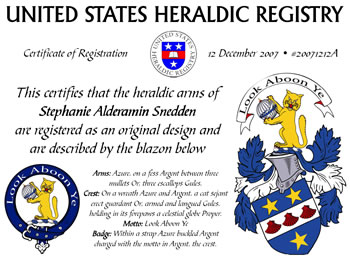 The arms are a reverse ordering of other Snowden/Snedden arms, to which I claim no direct descent. By so changing the ordering of the devices, I have also emphasized the azure color and mullets, which symbolize my profession, as does the celestial globe in the crest. The colors also happen to match my undergraduate and graduate institutions (U. California, Davis and U. Nebraska). The crest utilizes a cat, since I can't seem to stop rescuing them, and they have always been part of my life. The motto is Scots dialect, which reflects my heritage, and means "Look Above You". This refers to my profession, but also to keeping one's goals high. It is also a play on the motto of Clackmannanshire ("Look Aboot Ye"), the home of my ancestors.