This certifies that the heraldic arms of James Riley Johnson which were borne by his 12th great-grandfather Conn Bacach O'Neill, 1st Earl of Tyrone (c. 1480 - 1559) are registered and described by the blazon below 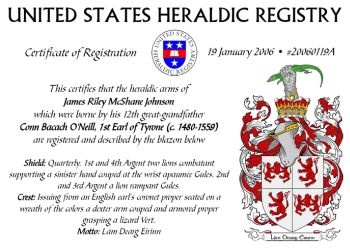 These were a version of the arms assumed by Aohd, King of Ulster in the 13th century. The English added the red lions.