Arms: Tierced per pale Azure, Vert, Azure issuant from a base of flames Proper a phoenix displayed, grasping in the dexter talon a sword and in the sinister talon a cross flory fitchy Argent.
Crest: A phoenix Gules flamed Or holding in its beak a rose Argent slipped and leaved Vert.
Motto: Ex Flammis Resurge (Rise from the Flames) 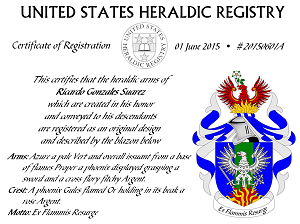 These Arms were created in honor of Ricardo Gonzales Suarez. He was educated in Manila, Philippines and worked overseas where he passed away.

The three vertical sections of the shield represent the three sons of the armiger. As education is one of his legacies, the tinctures represent the colors of the academic institutions where the sons have received their education. Blue represents the Ateneo de Manila University and green represents Far Eastern University. Furthermore, the shield with the green field between the two blue fields symbolizes the land where the family has taken root: the Philippines - a country in the east surrounded by waters; and Metropolitan Manila - the countrys capital region found between a bay and a lake.

The charge, a phoenix rising from the flames, symbolizes resilience and the ability to rise from adversities through faith, courage and hard work. The imagery of the phoenix being reborn from the flames brings to mind the aspiration for constant renewal to become better than the former self through seeking wisdom and knowledge.

The phoenix grasps in its talons a sword and a cross. The sword, while symbolizing the call to valiance and the pursuit of everything noble, represents the call to be of service to others. The cross symbolizes the Christian heritage and the willingness to uphold the treasured values of this heritage.

The crest shows the traditional heraldic depiction of the phoenix. This is a reminder to honor the past and to learn its lessons to be able to live the present to the fullest so in turn, it could lead to a hopeful outlook of the future. The white rose in the crest symbolizes love and faith. Furthermore, it represents the lady and the mother of the family, Ofelia.